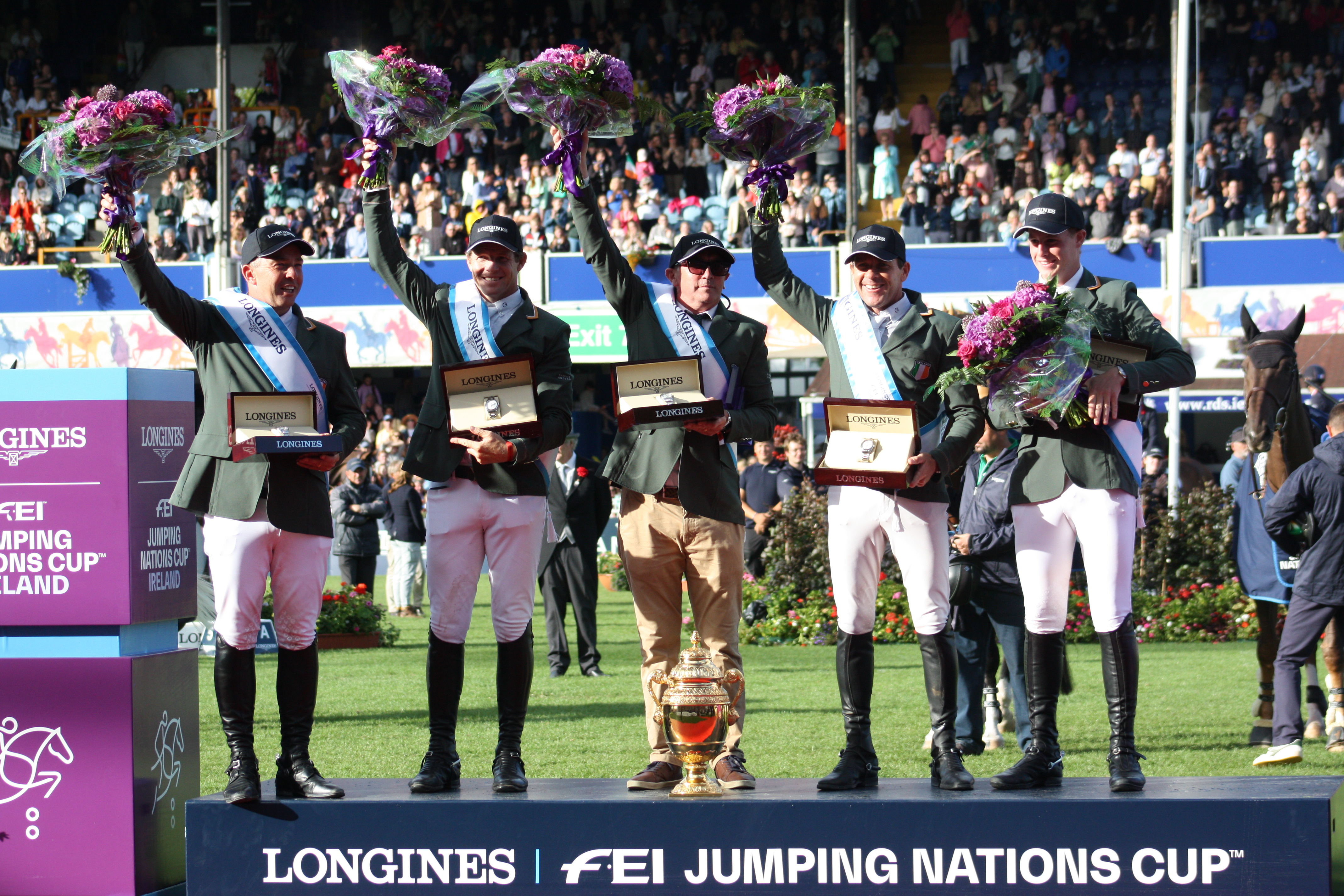 Today’s victory marks the 24th time that Ireland has won the Aga Khan since its first running in 1926 and crowns an outstanding season for Irish equestrian sport that has included multiple European and World Championship medal wins, along with team qualification for the 2024 Olympic Games in Paris.

Co Down’s Conor Swail was first to jump for Ireland with Count Me In, owned by Sandy Lupton and Mannon Farm. Swail got Ireland off to a perfect start with a faultless clear inside the time – one of just two clears from the first line riders.

Tipperary teenager Max Wachman (18), with the Coolmore Showjumping-owned Berlux Z looked to be heading for a clear on their Aga Khan debut. However the front pole of the very last fence fell to leave them with four faults, a score that kept Ireland among the early pace setters along with France and Switzerland.

Cork’s Shane Sweetnam was third to go for Ireland with The Irish Sport Horse James Kann Cruz (ISH), owned by Gizmo Partners LLC. As the rain began to fall over the main arena at the RDS, Sweetnam delivered an outstanding clear, never touching a pole to move Ireland into a strong position.

Meath’s Cian O’Connor was Ireland’s anchor rider with Kilkenny (ISH), owned by Susan Magnier. Another hugely impressive clear round from Ireland’s most capped Nations Cup rider meant Michael Blake’s team would hold the lead at the halfway stage. Ireland were the only team on a zero score with France and Switzerland just one fence off the lead on four faults apiece. There was a gap then to Netherlands and Brazil on 12 faults in equal fourth, while USA and Norway were in a share of sixth on 20 faults.

The second round saw Conor Swail complete a double clear performance with Count Me In, a second clear from the Co Down rider that kept Ireland in the lead. Max Wachman and Berlux Z then had just the last part of the treble down to repeat their four fault first round score for what was a hugely impressive Aga Khan debut for the Tipperary teenager.

France continued to put pressure on Ireland with three clears in-a-row in the second round which saw them complete on a four fault score. Shane Sweetnam looked like he was going to keep Ireland in the lead and was clear coming to the last with James Kann Cruz, but it fell to the floor meaning Ireland needed a clear from anchor rider Cian O’Connor to force a jump-off with the French.
As he has done so often in the past, O’Connor kept his cool under huge pressure to jump a second clear round with Kilkenny (ISH) to the delight of the home fans to set up a jump-off against the French after both teams finished with a two round total of four faults.

Marc Dilasser was selected to go against the clock for France with Arioto Du Gevres and he jumped his third clear round of the day, crossing the line in 31.81 seconds. Irish team manager Michael Blake selected Conor Swail as the rider tasked with winning the trophy for Ireland. Swail’s round with Count Me In was smooth as silk and the Co Down rider crossed the finish line clear in 30.31 to help his team win one of the most coveted trophies in World Show Jumping. France would take runner-up spot ahead of Switzerland in third on eight faults. Netherlands finished fourth, with Brazil fifth, USA sixth and Norway seventh.

Today’s result means Ireland have comfortably qualified for the 2022 Longines FEI Nations Cup World Final to be held in Barcelona at the end of September.

The result was extra special for Clare-native and Irish team manager Michael Blake:

“Coming here I thought we had a very good chance. We started off really, really well and then had a few uncharacteristic mistakes. Cian was cool under pressure to get us into the jump-off and that kept us alive and then Conor was just amazing. He asked me earlier in the year if he could be on the Aga Khan team and I said if you go to Langley (CAN) and jump well for me in Langley, which he did. He didn’t have to jump in the second round in Langley as the ball was already in the net but he had to do an extra round today.

"I am so thrilled. I just can’t believe the reaction of the crowd. To walk around the arena and hear them, full marks to them. They understand the sport and it means so much to them and it means so much to us. We win plenty Nations Cups but nothing compares to this. I want to thank everyone involved who helped to make this happen, our grooms, owners, staff working behind the scenes and everyone at Horse Sport Ireland.”

“I am absolutely delighted to offer my congratulations to Michael Blake and his squad of Conor Swail, Max Wachman, Shane Sweetnam, Cian O’Connor and Jack Ryan on a fantastic performance to win the Aga Khan. For Michael in particular, this is a very special moment and is just reward for the incredible amount of hard work and dedication that he puts in as Horse Sport Ireland’s Show Jumping High Performance Director. It has been a phenomenal few months for Irish equestrian sport with so many wins at European and World Championship level and of course Olympic qualification for Michael Blake’s team for Paris 2024.
"To win the Aga Khan is the icing on the cake and we can now look forward to the Longines FEI Nations Cup Final in Barcelona. This could not be achieved without the support of the owners of our Aga Khan horses – Sandy Lupton & Mannon Farm, Coolmore Showjumping, Gizmo Partners, Susan Magnier and Marguerite Ryan. And also the grooms and support staff without whom phenomenal successes like today would not be possible.”

The Irish Show Jumping team is sponsored by The Underwriting Exchange